I had circled August 17th on my calendar and promised myself that I would make post in honour of that auspicious day, exactly six months from my last day of work at my old job.  Here I am, well into November and just now getting to it.  Those six months flew by, but they were filled with some hard-won insight.  This transition into a new life was more difficult than I had imagined.  I was struggling a bit to find my footing.  I was waiting for a great revelation, an epiphany, that would spur me on to the next step, but it seemed my inner voice had grown quiet.  I was trying to write and to compose and nothing was coming.  I seemed to have nothing to say, and yet I knew in my heart this was not the case.

As my morale began to sink, I caught myself saying that I was unemployed, even though I was performing regularly and being paid for it. Not only that, when I wasn’t performing, I was putting a good deal of energy into cultivating a rich creative practice and building a studio. I had to stop doing this. If I couldn’t get past calling myself unemployed when gigs were so abundant with large projects waiting on the sidelines, what on earth was I going to do when things slow down later in the year? Some soul-searching was in order. I had to ask myself, where does this undervaluing of my work come from?  Insecurity?  Uncertainty?  Why won’t I wear the choice to be an artist proudly?  And furthermore,  why am I so jammed up artistically?  Why aren’t things happening?  Where is my drive?

Truth be told, I was expecting to be able to sit at a computer and just start typing, to walk over to the piano and drums and just start composing. I had cleared the way after all. I had made available to myself all the time I needed.  But somehow, I just couldn’t start. I was so confused because I had experienced such a sense of urgency in making the decision to change my life. I wasn’t expecting it to be so eerily still on the other side of that decision.  But, I have since come to understand that it takes more than time to create, and I had more work to do before I could get to it.  I had to let go.

I figured the best way to start was by owning the path I have chosen and communicating authentically about it. I’m not sure I’m truly speaking with confidence yet, but I am now saying things like: “I’m trying to be an artist full-time now.” or “I’m trying to do my artist thing full-time now.”  Still, a lit bit of  diminution, but not an outright fallacy.  It’s  progress.  And the more that I say it, the easier it gets, because I am the only one who is heading down the road of judgement and scrutiny.  Pretty much everyone that I share my news with is really happy for me and offers their congratulations.  I am incredibly grateful for this encouragement.  I am looking forward to a time when “I’m an artist.” will roll off my tongue without a thought and not feel at all like I’m speaking a foreign language and trying to pronounce the words correctly. I have to release old patterns of thinking and embrace what lies in the here and now.

Not surprisingly, where my mind wandered my body followed.  I would tell myself that I felt fine, yet I knew that somehow things were not quite right. Not only that, having just suffered a serious case of burn out, I was tired all the time.  I also wasn’t eating properly.  In fact, I learned I had an iron deficiency.  Worse yet, I was worried about my left wrist. It hurt a lot, pretty much constantly, a result of too much time spent at a computer in the old days of the job. I was managing it with ice, holistic ointments and wearing a brace when it acted up. Nothing really seemed to help and I was scared that it was going to impact my drumming. Fortunately I ended up having an opportunity to do a lot of yoga.  It was ashtanga style and even though I knew it would be wrist heavy, I went for it anyway.  It proved to be exactly what I needed.  By doing this body and breath work I was able to release a lot of tension and realign my body.  The instructors suggested that to alleviate pressure on my wrist I really concentrate on rooting down through my whole hand, right to the tips of my fingers.  It worked. As I continued to practice, my wrist sorted itself out. Not only that, tightness in back and hips that came from spending so much time sitting at a desk went away. I slept better and my body felt both flexible and strong. I could feel myself coming alive again and this impacted the kinds of food choices I was making.

Ashtanga yoga has practitioners doing the exact same sequence every time. As I continued to practice, I could see myself getting better at it. I realized something obvious had been eluding me: anything that is a practice should be practiced and practiced regularly. I needed to establish a daily routine that would get me to do the actual work of creating. I needed not only to start, but also keep myself going.  Luckily, just as I had help from my teachers in my yoga practice, I could get help with my creative practice from others. I didn’t have to do everything alone.

I found a weekend boot camp in late September for playwrights at Workshop West Playwrights’ Theatre in Edmonton.  In fact, I believe this wonderfully spent weekend may have helped me turn the corner on all of this and actually changed my life for the better.  It’s certainly put me in motion and that is a truly wonderful feeling.

This photo was taken in Kleskun Hills, Alberta on a beautiful August morning after a festival gig the day before.   The sparse beauty of this place inspires a sense of one-ness and connection.  As I leapt in the air I remembered something a dance teacher once said to me about jumping.  Don’t think about pushing off the ground.  Think about the sky opening up and making way for you.  For me, practice is about maintaining the courage to leap and the belief that a space is waiting for you. 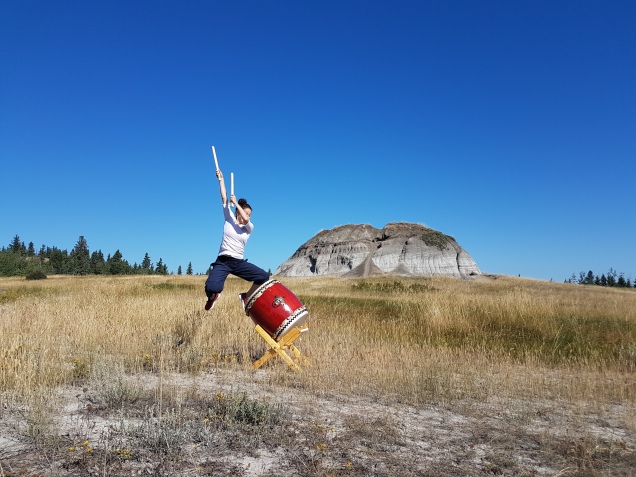